Meet Our Executive Board

Home »  About Gerladina Orphanage »  Meet Our Executive Board 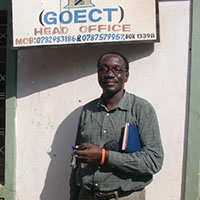 Thadeus Mutarubukwa the founder and president of Gerladina Orphanage and Education Centre is an environmentalist and a teacher by profession. He attained his first degree in Land use planning and environmental studies, then post graduate diploma in Education both at the University of Dar es salaam in the year 1993 and 1995 respectively. He graduated in Masters of Arts (Geography) in 2008 at the Open University of Tanzania, and currently he is pursuing PhD studies in Geography and Environmental Management at the University of Dar es salaam. He has a certificate in Children rights and advocacy from MSTCDC Arusha Tanzania.

From the time he graduated in 1993, Thadeus worked as secondary school teacher at different schools in Tanzania for ten years and worked with World Vision at various positions for eight years where he worked as a Programme Coordinator for 3 years, Zonal sponsorship Officer for 2 years and sponsorship Manager for 3 years. He is now working with Josiah Kibira University College as an Assistant Lecturer.

He is very compassionate, kind and close friend to the people he serves and those who are afflicted by different life hardships the orphans in particular. He is a man who is ready to sacrifice his own benefits for the benefits of others.  He is very interested to see transformed lives of those who are marginalized, and the philosophy about his life is that ‘’the value of my life will be counted through the impact my life brought to the lives of the marginalized people‘’. 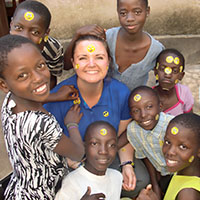 From the time she was a teenager, Kim felt drawn to Africa. When she saw that World Vision was planning a group trip to Tanzania in 2004 , she jumped at the opportunity. At the Toronto airport, Kim met a travelling companion, Emily Mallett, who she is proud to count as a dear friend to this day. The two ladies were part of a group of ten who travelled around Tanzania for three weeks, visiting families and children who were benefitting from World Vision’s projects.

One of the inspiring people they met was Mr. Thadeus Muturabukwa, a local teacher and supporter of orphaned and vulnerable children. Kim found the people of Tanzania to be welcoming and grateful for the little they did have. The children with their bright smiles were a joy to see and made it difficult for her to leave the country!

After Kim and Emily returned home, Thadeus lost his mother, his only remaining parent, and realized how deeply affected children must be when they have lose their parents. He approached his two Canadian friends with his greatest dream, to open an orphanage and school where these children could know the love and safety of being in an extended family and obtain an education. Both Kim and Emily were instrumental in helping Thadeus realize his dream and Gerladina opened its doors in 2007, then with just 5 children and 1 housemother. The Centre has come a long way since that time.

Kim would like to express her sincere gratitude to all of Gerladina’s sponsors and donors who have made this vibrant centre possible. It truly is changing lives!

A local and International Community Development worker, freelance writer, photographer and social entrepreneur, Miranda’s background working within the humanitarian and non-profit sector has led to diverse opportunities over the course of two decades working on campaigns and initiatives in Canada, Eastern Africa, Latin America and the Caribbean. With a focus on community development, outreach and advocacy, one particular cause close to her heart is endeavoring to improve the lives of women and children around the world by ensuring the protection of their human rights and equitable access to health, education, housing, social and economic supports. Miranda is committed to social justice and grassroots change through community participation and empowerment, and values the well-known but still very relevant quote to ‘think globally, act locally’.

Born with an inherent love and passion for animals, wildlife and the outdoors and a keen interest in cooking, gardening and nature, she has also become an advocate for the humane and ethical treatment of animals, food justice and sustainable agricultural practices. An earlier career in Travel & Tourism propelled her childhood dream of exploring the globe into a life-long journey, but outside of planning her next adventure, she can be found enjoying the company of her husband, two dogs, family and friends, cooking up a perfect storm in the kitchen or sitting around a campfire under the stars.

Miranda began volunteering with GOEC in 2008, and in 2011 she joined the Board of Directors. She considers it both a privilege and a pleasure to be a part of the GOEC team and looks forward to working with the Board, volunteers, partners and supporters toward a brighter future for the children of Tanzania!